A Lengthy Kitchen Revamp on a Budget 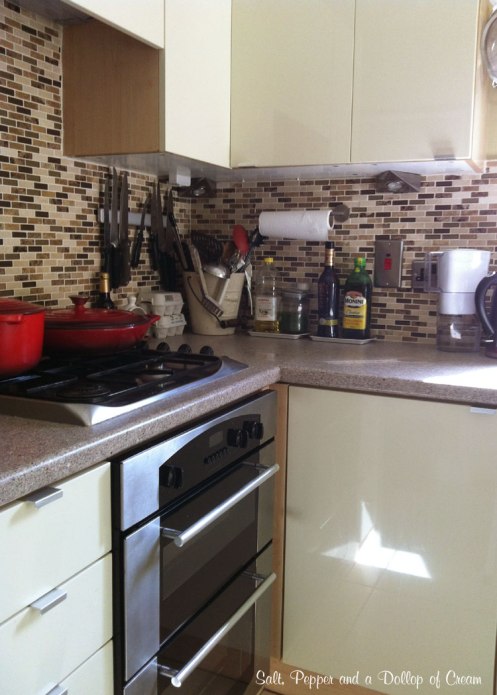 It’s been a while since I posted on the blog but I did have good reason people!  We’ve been updating our kitchen ourselves on a strict budget over the past number of months and April – May saw the last push to get it finished before my youngest made his first Holy Communion.  I have to admit that there are two things left outstanding but the messiest parts are well and truly over thankfully.

We’ve got a very small kitchen and when we first bought the house, the amount of storage was ridiculously small – the builder put in the bare minimum and left a lot of wasted space for extra cabinets. While I’ve always believed that you cut your cloth to suit your measure, adapt to what you have and be creative in your use of space, what we had was not enough and the kitchen was teeming with gadgets, plates, bottles, etc. We were lucky to be able to eat at the kitchen table it was covered in so much stuff!  So, we added more storage in terms of wall and floor units when we moved in but even then it wasn’t great, not really functional and became a complete eyesore!

With €600 in my hand, I went to a local kitchen fitters and bought two larder units and that was as far as I planned to go but when we saw the result, we knew we had to change the rest of the kitchen. So, over the last seven months, we set about revamping the kitchen.  This was not something I was going to rush as I wanted to be sure that anything we installed we loved and since we didn’t have a €20k budget, we definitely cut our cloth as our budget was 1/10 of that which in turn meant that I had to be resourceful in where I bought the necessary materials to get the job done!  We decided to reuse the original cabinet carcasses, just changing the doors, install a new sink, worktop and tiles and that was our budget maxed out. 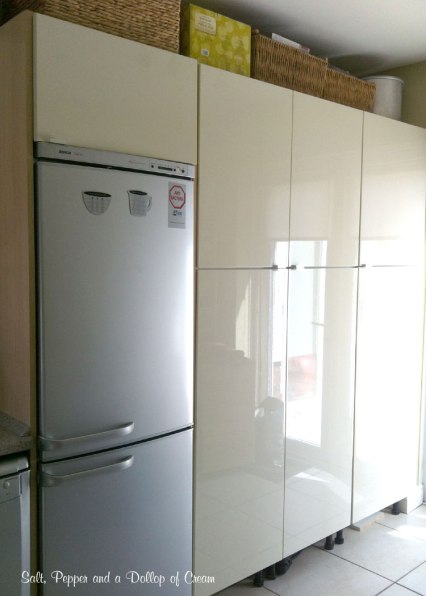 What I envisioned was a modern, stylish yet non-dating look where all my bits and bobs would be out of view and the kitchen would look clean and tidy bringing a few Ooohs and Aaahs from those allowed to enter the hallowed room!  I chose cream gloss doors which would reflect the light and make the space seem bigger.  We built and installed the units and were quite pleased with ourselves.  Then while Hubbie was at work, I changed the remaining doors.  The drawer unit nearly killed me as I was converting a four drawer unit to a five drawer one.  I was never brilliant at maths and I can safely say that I’m still not but I managed to get the drawers in and looking even!! A MAJOR miracle folks! 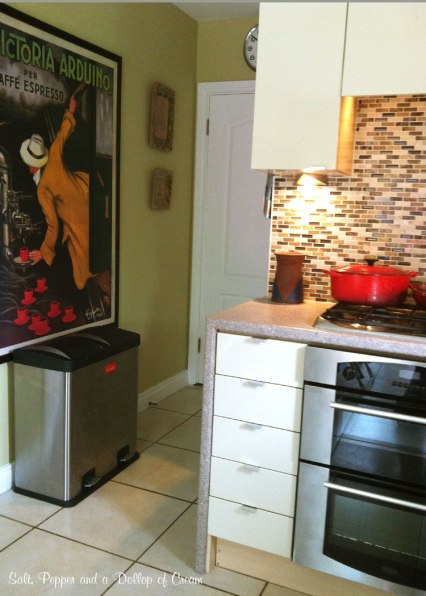 After that I spent some time looking for a worktop even though Hubbie didn’t really see the point. I hated what I had as it was difficult to keep clean and didn’t really go with what I had in mind.  Worktops in the kitchen fitters were very expensive and when you add labour, even more so.  I still had to find a sink and then there was the tiling to consider.  One morning while at my local DIY store looking for something gardening related, I passed a special offer stack of worktops at €30 each.  I stopped dead in my tracks.  €30!!!  The ones in the fitters started at €150.  Could this be true???  A passing sales assistant come to my aid picking me up from the floor where I’d collapsed in disbelief and brought me to the worktop section of the store.  Lo and behold, here was another special offer of a deeper worktop in a stone-effect colour for €60 a length.  What could I say except Come to Mamma!  This miracle offer meant I had a few extra pounds to add to the sink fund!  A very dear friend’s husband was commissioned to install the worktop and I bought a lovely deep sink and flashy tap in another DIY shop down the road. 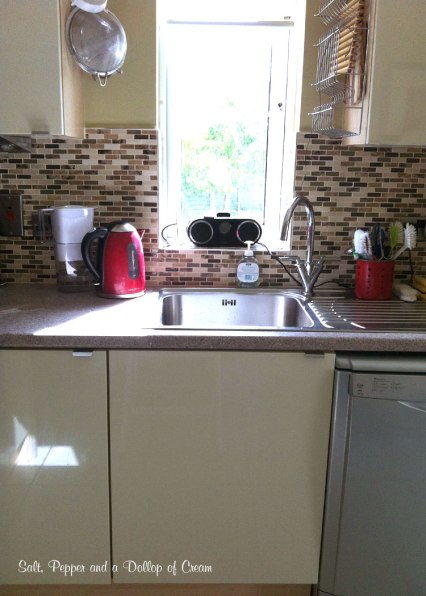 Yes, it was all coming together nicely…

Nicely indeed until the tiles!  Now, I have to admit that I have an addiction to Houzz.com!  I’ve spent many an hour looking through photos trying to find inspiration for the kitchen and kept looking at mosaic tiles.  Yes, it had to be mosaic.  Finding a nice mosaic tile was fun – not really.  I found one I liked but it had to be sealed A LOT before use and that didn’t really appeal to me.  I could see into the future and my future was filthy, greasy grout.  No thank you.   I eventually found THE tile – a nice gloss interspersed with glass.  These tiles come on a mesh background and are a NIGHTMARE to install.  Even though I waved the flag on this one and hired in a pro, they ain’t easy to get flat or even so don’t expect a precise installation.  This was hard for me as I’m very fussy when it comes to hired hands – I expect perfection as after all they are experts {I don’t expect that of myself and see my own mistakes as talking points and reflections of my personality – scatty} but I could see that these tiles were not made for making life easy so if you go the mosaic route yourself, take heed and cut some slack. 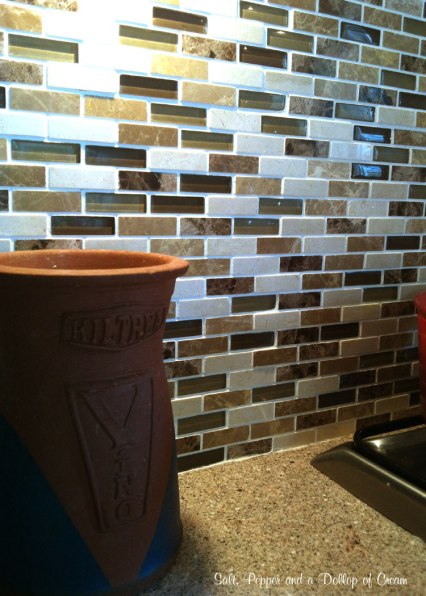 Bar the plinth under the larder units and trim at the end, the kitchen is done.  I’ve to find maple board somewhere which is not going to be easy as its fallen out of favour {why?} and I want to make plinth drawers to put my tool box into and the drill so it’s ready for my next project whatever that will be.  But for the moment I’m happy to enjoy my revamped kitchen as it is.  The table may still not be 100% cleared {it never will} but I’m just loving the new look.

7 comments on “A Lengthy Kitchen Revamp on a Budget”

This entry was posted on May 28, 2013 by Paula {Salt, Pepper and a Dollop of Cream} in Misc and tagged budget, cooking, DIY, food, kitchen, makeover, mosaic, revamp, tiles.