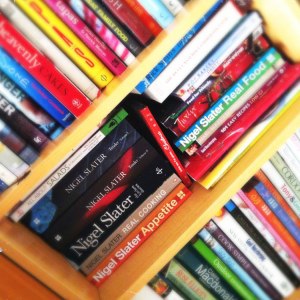 Ok, so I thought I should share my little library of cookbooks with you so you can see firstly what a compulsive problem I have with buying them and also to see where my food journey is heading. It’s a random mix of books that is ever expanding; I like to think of it – and me – being rather eclectic! I’ve thought about how best to list them but have decided for the moment just to list them more or less as they appear on my bookself with a rough categorisation {I may change my mind and get all organised but if that did actually happen, we’d most likely have rain for a century!}. What I will do, though, is separately post little reviews on my favourites.

As you know, I haven’t actually cooked from a lot of them. If you have any of these books already, please point me in the direction of wonderful recipes you’ve cooked so that I may try them, which ones to stay away from or {dangerous suggestion here now} let me know if you think I’d like a cookbook that doesn’t appear on this list!